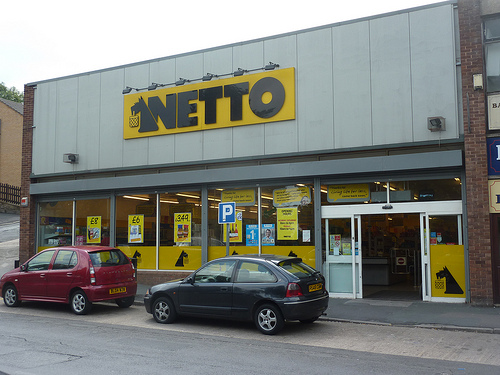 News of Sainsbury’s partnership with Danish-based Dansk Supermarked brings back happy memories – I did their PR in the UK for a number of years – and very proud of some great work and creating some great legends, including inadvertently starting the ‘Great Baked Beans War of 1994, as well as some more outlandish creative ideas they never used which could have been appropriate for their brand in the 1990’s.

Interestingly, their launch as a discount retailer was a great indicator of how Britain is still a class society. The company, well established in much of Europe, was one of the first to launch the discount store concept in Britain.

Although well respected on the Continent – a sort of similar status that the Spar brand has in the UK – the company’s management were surprised by the different response they found here on this side of the Channel.

Instead of being seen just as a good, honest, low-price retailer, they found themselves the butt of many cruel jokes and jibes: ‘What’s yellow and black and full of crap? – a Netto shopping bag!’ and schoolboy chants of ‘N-E-T-T-O – that’s where all the slappers go!’ were just some of the printable ones to share.

Netto was actually a victim of the British class system. You couldn’t be judged as just good and cheap, but rather defined by the type of person you engaged with: Netto was for poor, lower class people and for middle class and wannabe middle class people Netto was not for PLU’s – for people like us.

My advice at the time was to create a personality of ‘Yes, we’re cheap, but we’re also cheerful: you couldn’t hope to shift deep-seated class attitudes (certainly with the miniscule budget I had to play with), but what we could seek to do was at least build some likeability and favourability, by showing an ability to parody and deprecate our brand image (rather than ignoring it, wishing it wasn’t so.)

Netto’s management, however were not in favour; because they believed its reputation was not fair, eventually people would come round to a proper, true recognition of the Netto brand.

They failed to recognise that perceptions are emotionally based (people had a vested interest to look down upon Netto to make themselves feel superior) and they had de facto created a Netto-meme of ‘yellow-and-black-cheap-and crap’, pass it on.

Anyway, here are three ideas that Netto rejected – and also one that they agreed with, that led to the ‘Baked beans wars of 1994’.

My solution was to instead ban them; any celebrity in the news for being naughty, or some other misdemeanour – and this included people like footballers David Beckham for being sent off in that year’s World Cup and David Batty for missing a penalty.

It was a form of triple-reversed psychology: people knew these celebs didn’t shop at Netto; Netto banning them was a ludicrous, futile gesture, but surfed on the immediate, topical public dissonance regarding these celebrity figures. As a result, the story might raise a smile, and would hopefully become an established meme for any disgraced celebrity and public figure: they would face being banned by Netto.

The stores could have had a poster on the door listing the banned celebrities that week, the media would have a footnote to any celeb story, and everyone would have a smile at the cheek of it all.

Sadly, the idea ended up on the rejected pile.

2. Chateau Netto
Much of Netto’s own brand goods were of a good quality. (OK, maybe except the cat food, where even after our cat had rejected, and even Tom, the street stray where we used to live, turned its nose up at it!)

I argued for a really great value wine branded ‘Chateau Netto’, with a bold yellow and black label, to proudly assert the core brand. You might not like the parent brand but you couldn’t argue the wine was bloody good value.

Chateau Netto would have been a powerful brand icon, and generated great word of mouth, and become a much loved and consumed testimony to Netto’s great value.

3. The Elvis Hotline
This was an idea inspired by a Viz cartoon which had one character claiming he had ‘seen Elvis down at Netto’. I used it to develop the idea of a Hotline to report any sightings of Elvis at Netto.

Again, a bit of irreverent fun, making a trip to Netto more than just getting cheap food.

The idea never rocked with Netto.

4.The Baked Beans Wars of 1994
Well actually, this was one that did see the light of day, and was quite unintended.
Challenged by having no budget to do new store openings I asked f there was any products which were on sale at a low price. The offer of tins of Netto own brand baked beans at 12p (which actually were quite nice) was the highlight of my next store opening.

Unintentionally we had thrown down the gauntlet to other discount retailers, and soon they responded with an 11p a can offer.

I was to discover nothing quite galvanises a discount retailer with the prospect of being undercut by a rival, and soon my store openings were offering cans at 10p, 9p,8p,7p – and finally bottoming at 6p a tin, if my memory serves me well.

Thus, was born what was dubbed ‘the Baked Beans Wars’ of 1994, with much media coverage of the low prices, and in many instances, good quality beans offered at Netto. And their new stores opening.

Well, at least that was one battle won!
The lesson for brand marketers from the Netto experience is the fundamental: no matter how much you do to shape, position and craft your brand, your ultimate brand image is determined by the minds of others, who have their own self interest, prejudices and pressures to conform that ultimately determines your brand reputation.

The lesson for consultants is that creatively, you can only ever be half a step ahead of your client.

The launch of the new Netto may serve to indicate that Britain is less of a class society, or just that discount retailing has finally become socially acceptable. Whatever strategy they adopt, it will be a more receptive climate than the one I faced back in the mid ‘90’s.