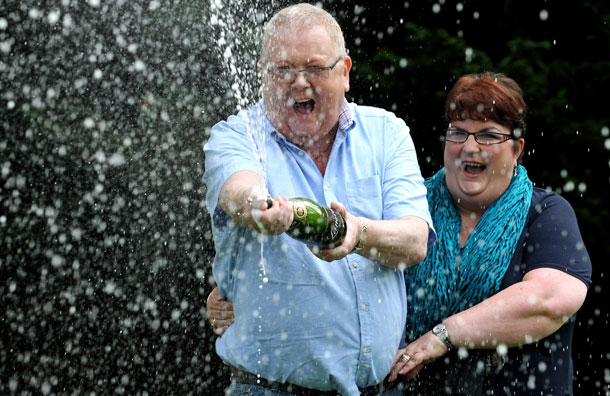 News that one of Britain’s biggest lottery winners is giving £3 million to the ‘Yes Scotland’ referendum campaign brought a smile to my face and got me thinking.

It also connected me to a good deed I did yesterday, picking up some other dog owners’ dog poo – even though it was only 3ft away from a poo bin.

The reason why I smiled on reading about how Colin and Chris Weir, who won £161 million in Britain’s biggest ever lottery win in 2011, is not because I am passionately behind the ‘Yes Scotland’ campaign, but partly because of the sheer randomness of it; how the course of British political and cultural history could be shaped by a random event of a retired television cameraman and his nurse manager wife winning a lottery.

More profoundly, it got me thinking about wealth – and what you should do with it.

For the Weir’s their wealth is evident: they woke up one morning £161 million richer because of an explicit event in their lives, happenstance linking their lottery ticket with the jackpot prize.

But all of us, although we may not have the explicit financial wealth of the Weirs, we do all enjoy however, another form of wealth  – implicit wealth, in terms of who we are, our values,  skills, talents, experiences, energies, networks and connections.

We can all enjoy our wealth, which I am sure the Weirs did in their first flush of celebrations.

But we call go a step further, and credit to Colin and Chris Weir, who decided that they could use their wealth to help create the world they want.

What world do you want? And can you do anything to make it better?

Which brings me to the dog poo.

While out walking Dylan, my wife’s Westie, I came across the offending dog poo, lying there uncollected, just 3ft away from a poo bin.

My initial reaction was of contempt to the dog’s owners for not being responsible and cleaning up after their animal.

My feelings then turned to annoyance that there was offending dog poo in a public park which a child could tread in.

So, I was starting to feel more negative because of someone else’s irresponsibility.

And I thought, why should I let them affect the way I think.

Recognizing that I had a spare poo bag with me, I picked up the offending poo – and my mood changed from being negative to actually some form off civic and personal pride that I had done something to make my world better. (Don’t worry, I have washed my hands to write this blog!)

Which brings us back to the Weirs.

With their newfound wealth, to their credit they are using their wealth to create the world they want, in this case an independent Scotland.

So, some questions to ask yourself:

What wealth have you got? Not just money, but what skills, talents, connections, networks or time can be employed differently in some way?

What good can you do with it? How do you want your world different, whether it is offending dog poo in your neighbourhood, or the destiny of your nation?

How can you leave the legacy you want? What is the footprint you want to leave? What are the 5 words you want your ancestors to describe you?

And crucially, what can you do now?

Someone in Barry Island picked up some dog poo, the Weirs are giving £3 million to the Scottish referendum campaign. Act now.