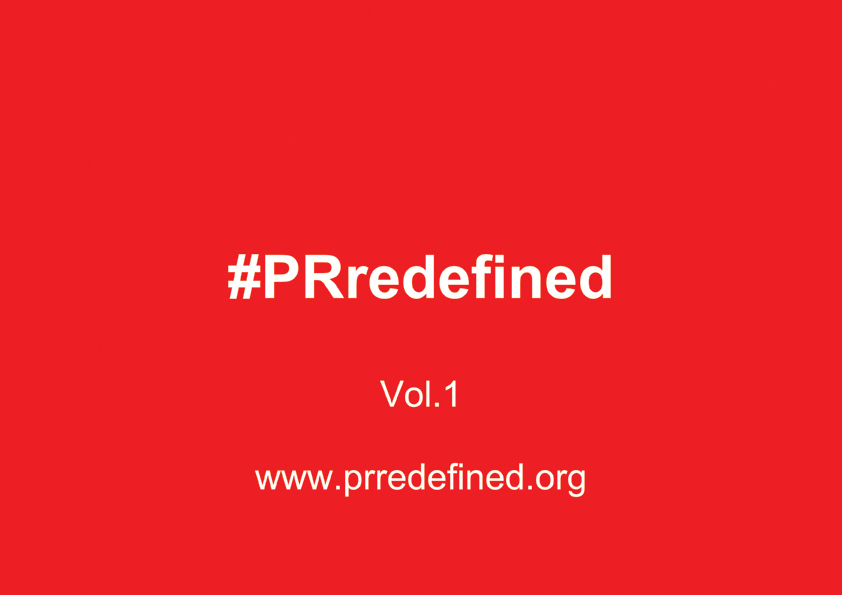 I am extraordinary proud to have helped get a new initiative underway to tackle a profound issue in communications and PR – can we redefine PR and create a new theoretical framework for its thinking and doing.

#PRredefined is your call to change your future for public relations. The ambition is to nurture a new theoretical framework of thinking to redefine what we mean by ‘public relations’ to enable it be at the forefront in harnessing revolutions in neuroscience, psychology, technology, communications, brand thinking and complexity science theory.

It aims to appeal to serious thinkers and to anyone unhappy with the status quo of PR thinking. The initiative seeks to bring the academic and practitioner communities closer together, by establishing a vibrant network to engage with the challenge. We aim to light a torch to illuminate a way ahead for everyone with an interest in the public relations profession.

#PRredefined is a new international initiative with a bold ambition – to stimulate and lead the way in new thinking about the theory and practice of public relations – ultimately changing how ‘public relations’ is defined and delivered to make a positive difference.

#PRredefined features the launch of a series of ebooks and online forum, along with other events to enable practitioners and academics around the world to contribute, challenge and debate to stimulate different perspectives about creating a new theoretical framework and ultimately redefining what is meant by ‘public relations’.

The first ebook in the series, #PRredefined Vol I, features new definitions for public relations, challenges much of what constitutes current PR theory, and provides insights and ideas to enable the profession to harness revolutions in neuroscience, psychology, technology, communications, brand thinking and complexity science theory.

The first wave of collaborators in the not-for-profit project include contributions from Africa, Asia, Europe, and North America, including practitioners and academics, with their ages ranging  from 30 year-old Rizwan Sharif to 90 year-old Tim Traverse-Healy OBE.

Anyone wanting to contribute their ideas, insights or opinions can submit their views at the initiative’s online forum at www.prredefined.org

Sure there have been many previous, and often very worthy efforts. This is a completely different approach which may lead to a new definition for PR – but is too early to say, or if indeed there is any new definition of ‘public relations’ awaiting discovery.

What is being sought is a new ‘fit for purpose’ theoretical framework for public relations in the 21st century. A definition is a bit like a cherry on a cake of theory: we may need to create a new cake before we can then decide on the appropriate cherry to sit atop.

There is a view that much of the orthodoxy labelled as ‘public relations theory’ is at best out of date. At worst it is irrelevant to the changing needs of public relations as a discipline to serve our wider society, and to assist practitioners in current practice.

You need good theory to do your job to its optimum potential. Good theory provides foundations to your clarity to your mission. If you have an effective theoretical framework it helps guide you to identify next steps, with key principles steering practice.

Sadly, many worthy and well-intended efforts have failed to secure universal acclaim or recognition. In some cases we suspect the resulting ideas were not seen as relevant to day-to-day PR work, nor real-world focussed or were over-complex.

The ebook #PRredefined Vol  contains the views that earlier efforts to define ‘public relations’ were hindered by being top-down led, nor memorable or meme-friendly,  using the wrong starting point, working within existing definitions of ‘PR’, not from new insights in psychology on how we think, decide or behave.

There is also a need to be globally inclusive and dare we say it, while the exercise is serious, there is still scope to make it engaging and interesting.

We will know we are successful if the content generated is:
•    Engaging, relevant to you and your work
•    Relevant to making a positive difference to the world
•    Academically rigorous, yet, easily understandable
•    Learn from new insights and knowledge from outside ‘public relations’
•    Be global and inclusive, respectful of different opinions
•    Be independent, not owned by anyone, any organization, or any nation.
•    And gives anyone who cares about what we do in public relations – the chance to engage.

Everyone with a serious interest in the future of public relations has the chance to have their say. There is a Google+ forum at www.prredefined.org for anyone to contribute, listen to other new ideas, spread the word and put any new ideas or theory into action. Anyone can join in, to create a new canvas, a new way of defining ‘public relations

Who owns this initiative you might say? It consists at present of a first wave collaboration of individuals featured in Vol I of #PRredefined. The structure is deliberately minimal, designed be open for anyone with a passion to play whatever role they feel would be useful to the overall goal of the exercise.

It is hoped through discussion on the #PRredefined Google+ forum (www.prredefined.org  ) that any future structure as it exists will emerge from.

In keeping with the bottom-up approach there was no conscious strategy of selecting the contributors to Vol.I. #PRredefined has been a classic case of bottom-up/emergence thinking.

The original inception of one small act, a submission by Stephen Waddington to his accreditation with the UK Chartered Institute of Public Relations was then envisaged as a blog but after further debate and discussion with me  followed by several conceptual leaps become an ebook of Stephen Waddington, Andy Green and Philip Sheldrake.

Then combinations of chance encounters and meetings around different parts of the globe including South Africa, and Uganda, and various new connections and iterations led to the product of #PRredefined Vol. I

Practising what it is preaching, the initiative has abided by a philosophy of believing in championing bottom-up activity with the potential to grow emergent new ideas. This could be a crucially different way forward to avoid problems encountered by earlier efforts to ‘redefine public relations’ using a top-down approach.

As a result of the bottom-up, emergent nature of its production, rather than driven by a top-down master plan, which ultimately becomes someone’s property and bears their thumbprint on subsequent activities the idea evolved rather than followed a plan. We sincerely hope as many organizations do decide to get involved as much as possible now the idea has emerged.

#PRredefined is a completely independent production. It will seek to engage with as many bodies around the world with an interest in the future of public relations as possible.

We all know something needs to be done. Serious thinkers unhappy with the status quo of PR thinking need to do something. The idea grew out of a collaborative process. The contributors are capable individuals, of some standing in the profession. Yet a key value within the project is humility – there are other different voices and no doubt, more expert opinions and voices to be heard – and it sincerely hoped these voices are heard. The way forward is working together. The collaborators have merely lit the touch paper.

The timescale of the project is open-ended: it may last at least for a year, or could go on well beyond. The touch paper has been lit.

There has already been the observation of why aren’t there more women involved in the project? It’s a good observation – and the cue for anyone to contribute to address any existing gender imbalance of contributions and in subsequent Volumes of #PRredefined

#PRredefined is not just a UK project. Although there is a preponderance of UK-based contributions it is hoped #PRredefined will explore, reinforce where appropriate and go beyond its current contributions from Africa, Asia, Europe, and North America.

There is a very important role for academics to contribute to the ideas, content and new thinking both on the Google+ forum and in subsequent volumes of #PRredefined, and also engage their students in the challenge, but also to use this exercise to build closer relationships and partnerships between the academic and practitioner communities.

If we can help build a better theoretical framework for public relations, it will provide a more robust platform for future practice.

The intention is to make the work as widely available as possible. At the same time in order to make the initiative sustainable and independent, it would be helpful if it could secure a modest income source generated from ebook sales – which is at the minimum price set by Amazon.

We are adopting an ‘Honesty Box’ approach, trusting the honesty of practitioners to not abuse the arrangement.

Don’t worry if you don’t have a Kindle so cannot read ebooks. #PRredefined is published using an epub file. It can be accessed by using one of the following methods:

Computer
Download Adobe Digital Editions at http://www.adobe.com/uk/products/digital-editions.htmland add the file to the library.
Or, you can download Sony Reader app https://ebookstore.sony.com/download/
Or, you can download epubreader as an add-on onto firefox https://addons.mozilla.org/en-US/firefox/addon/epubreader/

iPad/iPod Touch
An ereader app should be installed on your device, such as iBooks. Then, you can drag the epub file into iTunes when your device is connected. Alternatively, open the file from your email client, and it will give you an option to open in an app.
Ereader
Most ereaders will be able to read an epub file. Simply copy the file into your ereader according to instructions.

The idea is being shared as widely as possible. I am for example, sharing #PRredefined at the EUPRIO (for public relations practitioners working in Higher Education) conference in Innsbruck Austria in September. A number of events are being planned. We are also investigating webinars and video channels. Why not organize your own #PRredefined event?

It is a not-for-profit initiative. Any income generated through ebook sales will be re-invested in the initiative to extend its impact and reach.

Everyone has contributed their time and energies for free. Some tiny seed funding for design costs for the ebook were contributed by two of the first wave of collaborators.

#PRredefined is creating an environment that fosters collaboration and thinking about new ways of working at a local level rather than being prescriptive in its direction.

It aims to trigger a strategic dialogue between industry Thought Leaders and the wider global PR community of practitioners and academics through a planned series of co-created low cost ebooks (in UK for example, at the minimum Kindle price of £1.53) underpinned by an on-line forum, and other activities, to stimulate both top-down and bottom-up development of new insights, ideas and inspirations.

By embracing and welcoming diversity in the debate this project has the potential to engage with lots of ‘communities’ all with their own view of their world, enabling practitioners to find their own way to suit their own situation or culture.

It may lead to outcomes of a new over-arching super-narrative and definition about what is ‘public relations’ or stimulate a family of narratives: either way, the net result should be a better informed community with a deeper and more robust philosophical understanding of its own significance.