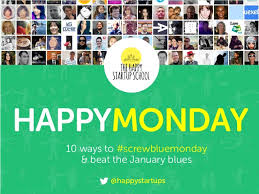 It’s Blue Monday on Monday January 20th)  – symbolically the most depressing day of the year.

And it provides a great opportunity to promote greater understanding about mental well-being, positive psychology, or just an excuse to have a good time.

It’s also a wonderful example of experience how memes operate and how we live in a world where we largely operate in what the psychologist Daniel Kahneman calls ‘System 1 thinking’ – driven by emotions, perceptions, and shaping life how we want it.

Sometimes the two worlds collide and that’s the case of Blue Monday. And maybe people who live in the System 2 world need to understand more about System 1 thinking and memes, so they can have a better understanding of the reality of the world around them.

We now have a fact about Blue Monday: Blue Monday exists because people want it to.

Certainly there is no System 2 data to quantify the mood and state of people’s thinking on the particular day of ‘Blue Monday’. (Defined by the psychologist Cliff Arnall as usually being the third Monday of January.)

We do however have some ‘data’, some evidence, albeit of an informal kind: since 2005 the story of Blue Monday has grown and grown in terms of scale of media coverage and its ability to replicate with ease, with just the tiniest of promptings from yours truly.

This, I would suggest, is offering some evidence of an as yet undefined mass phenomena, a zeitgeist – a mood of a time – perhaps indicating an under-the-surface root cause.
For the last 8 years I have been promoting the third Monday in January as ‘Blue Monday’ – as now symbolically the most depressing day of the year, associating the concept with a call to promote better mental well-being and mental health issues.

Psychologist Cliff Arnall in 2005 originally devised a formula for ‘the most depressing day of the year’ in support of a public relations campaign (which I had nothing to do with).
I responded to the initial story and obtained some great media coverage. Everyone involved in the original story had no plans or use after its original use, but I recognised its meme potential, as a regular annual story.
I then took command of the opportunity, gave it a brand name of ‘Blue Monday and sought to link it with mental well-being and mental health causes and since 2006 have run with it. Note: I don’t own ‘Blue Monday’; if you learn more about memes, you will find, like the concept of brand, they reside in other people’s minds and networks.
I have been doing Blue Monday for no payment – I haven’t wanted or received a bean for my efforts with it. I do it partly as part of an academic interest in memes, using the world as a real-life laboratory, and it has real potential to do social good. I also do because I’m Britain’s oldest teenager.

If you know teenagers there are two ways to motivate them to do things: one is to pay them, the other is to say ‘No’.
And because a network of highly influential scientists who have done the equivalent of saying ‘No’ it has actually spurred me to keep going.
Cliff Arnall with his initial pinpointing of a date, and my later branding the
date ‘Blue Monday’ were merely triggers for uncovering what I believe is a latent phenomena.

Why is Christmas Day on December 25th? A common held theory is that the early Christians merely piggy-backed on the existing Pagan ritual of celebrating mid winter. Seemingly, our ancestors perhaps wanted some cheering up in the middle of a bleak season in the northern hemisphere.

Linking the event with a Pagan celebration with another underlying issue created a bigger occasion. (Does this seem a familiar strategy to you?) The underpinning rationale was presumably to make your new spiritual celebration more likely to be adopted by linking it with something that cheered people up in response to an undefined, no data-collected zeitgeist of people feeling fed up, a feeling of discontentment in mid winter.

Even though surveys show a decline in religious belief and attendances at Christian churches in the UK, Christmas as a celebration keeps going and growing.

Because people want it to be. It fulfils other emotional, psychological and sociological needs. And because as a meme it is very efficient: it’s easily copy-able, do-able, pass-onable and spreadable.

‘Blue Monday’, could merely be a further, perhaps a further tremor on the Richter scale of unhappiness, a minor wave of discontentment, a month after the mid-winter celebrations (now labelled ‘Christmas’).

Perhaps abetted by modern phenomena, such as the monthly pay check, the monthly on-coming of the credit card bill, and a social more of creating New Year’s resolutions, it all helps create a further wave of discontentment.

The additional dimension of many people receiving their December pay cheque on Christmas Eve, is good news for having money for the festivities but bad news in making January a ‘five week month’ in terms of pay: your monthly salary has to extend to a further week.

‘Blue Monday’ I would suggest, could merely be a further, perhaps minor wave of discontentment, a month after the mid-winter celebrations (now labelled ‘Christmas’).

Sure, there is no data to support this theory, but then again, I don’t see any statistical data about the mid winter blues timing with the Christmas period.
I would suggest the potency of the Blue Monday meme launched since 2005 is an intellectual touchstone for justifying Blue Monday, as it offers a clue to a possible Zeitgeist.

The origins of Blue Monday may be a bastard child in the world of artificially contrived days. Yet from my Blue Monday experience, I conclude that some members of the scientific community have problems engaging in a dialogue unless 100% data is available before the conversation begins. 100% data is only available for the closed mind in well-prescribed and defined situations.

In the cause of promoting greater understanding of science in the wider world, this is not a helpful characteristic. Indeed, it provides a prop, a support for not being able to connect fully with others – a scientific disconnect.
So, I am very proud of one of my babies. No, not one of my two daughters (of whom I’m immensely proud!) Rather, one of my creative off-springs, a meme – ‘Blue Monday’. It is a source of great happiness – but also some unhappiness.
1 .As a symbolic day it is now being used by a number of good causes to promote their message, generate activities and crucially raise valuable funds. Potentially, if Blue Monday could just generate less than 1% of that raised by say Comic Relief it could raise £500,000 a year for good causes.
2. It creates a precious talking point and potential media hook for subjects which face difficulty getting a hearing, such as mental health, depression and suicide.
3. It creates a welcome opportunity for positive well-being and asserting happiness and joy in the world.
Last year I listened to BBC Radio Wales on Blue Monday which not only played a series of uplifting, good mood enhancing songs, but also had a live outside broadcast from a school where youngsters had their jokes aired, (“Why did the chicken cross the playground? To get to the other slide!” was a typical effort.)
The show later got a text from a woman, who was foster mother to one of the children who had their jokes broadcast. She was delighted how it would boost the youngster’s confidence and self-esteem.
Doesn’t that make you feel good?
4. Blue Monday also serves as an example of a ‘meme’ – a fundamental aspect of communications which most people in PR don’t even know about.
Much work needs to be done on getting people to understand memes. In the communications business where I work, you would think that they are all over memes, recognising the mechanics of how they work and would harness meme-power as central, at the heart of communications campaigns – the Movember campaign is a great example.
But I’m still annoyed that Blue Monday is not fulfilling its power for good.
Yet, we are getting there.
This year the campaign group Action for Happiness who have previously refused to discuss my suggestions to them to harness Blue Monday as a vehicle to promote greater happiness now are doing their own campaign #screwBlueMonday – and I’m delighted: it’s harnessing the Blue Monday meme, promoting a message that you don’t have to be unhappy on this day, and it further spreads and deepens the Blue Monday meme.
I really hope the campaign generates positive added value for them.
For anyone System 2 Thinkers out there here are some suggestions:
Recognise the significance of System 1 thinking, and memes.
Maybe just realise that even if it is not completely to your taste, liking or measure, that other people may be getting some benefit out of it.
And also – please do enjoy yourself on Blue Monday. I know I will! – and do check out the campaign web site www.beatbluemonday.org.uk