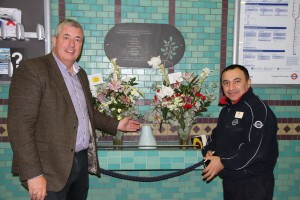 In my innovation and creativity classes I encourage people to develop a skill to spot opportunities, to listen out for new ideas or positive examples of good practice from unlikely sources, to adapt and apply to your own situation.

This is at the heart of your creative capacity, underpinned by a self-confidence, self-belief and self-motivation to enable you to deliver creativity in your world.

On a recent Tubespiration! Tour I discovered a new hero of the London 7/7 bombings – albeit someone who performed his heroics several years after the terrible tragedy.

The July bombings have a particular resonance for me: I missed the Aldgate bomb by 12 minutes (although I argue that we all missed it by 12 minutes). More significantly, a dear friend lost his sister in the terrorist action which prompted me to create a special ‘Hope after the bombings event’ in Leeds which explored the PR and communications issues in the aftermath of the tragedy.

If you visit Aldgate station you will see a remarkable shrine to the victims of the bombings.

It’s remarkable not for its size, ostentation or distinctive style.

Rather it is the very opposite of those attributes which make the shrine so powerful: it is understated, in its way softly-spoken, or even simple, yet somehow is beautifully divine in its simplicity.

And what’s more it was the design not of a great artist, architect nor designer. It’s the creation of a humble Tube worker; a man angry and not prepared to tolerate his reality – the way his world was around him – and do something about it.

I had the pleasure of meeting Mario Christodoulou, a London Underground Station Supervisor at Aldgate after his colleague told me about his deed.

Initially, the 7/7 bombings was marked with a commemorative plaque featuring a roll call of the victims in the concourse at Aldgate. The victims’ families honoured the memory of their lost ones by having fresh flowers delivered to the station which were placed on the station floor beneath the plaque.

Sadly, at busy periods the flowers were often inadvertently kicked or unwittingly trampled upon in the travelling crush.

Concerned staff asked TfL management to do something about it, but no constructive response was forthcoming.

That could have been that. But that didn’t take into account the determination of an ordinary person willing to do their bit of extra-ordinary, to right and tackle what they perceived as a wrong.

On his own initiative Mario created a shelf under the plaque and abutted it with matching tiles to the surrounding wall which would house the floral tributes to ensure they avoided the ignominy of unintentionally being trampled.

It literally is an example of bottom-up thinking: no designer given a brief could have created the masterpiece of understatement of Mario’s Aldgate shrine that was created from its environment rather than being imposed, top down.

Please do visit the shrine. It really is a touching tribute to sadly missed loved ones and as a reminder of a tragic, tragic event. (I later discovered that Mario had met the Queen when she visited Aldgate station after the bombings, and he was interviewed by TfL’s own house journal ‘On the Move’.)

If you do go to Aldgate, please also reflect on the bravery of Mario: Mario’s courage is not that of someone facing violence or intimidation. Rather it is a bravura of not willing to put up with something wrong and taking personal responsibility to change their world.

A postscript to this tale is Mario’s personal story; of Greek-Cypriot stock he came as a baby with his family to the UK. A telling-reminder of how British society is made better by the contribution of decent, hard-working families migrating to these shores.

If your interested in finding out more about Tubespiration! please visit www.tubespiration.com