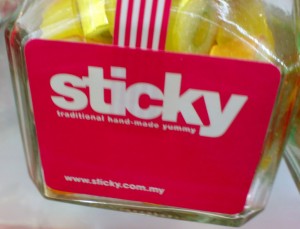 One of my favourite scenes from the BBC Comedy series ‘Black Adder III’ is the encounter with Dr. Johnson where Edmund Black Adder makes up words on the spot to confuse the lexicographer and creator of the first modern dictionary.

It seems we are in danger, not so much false or empty words entering our vernacular, but rather that we face an urgent need for clarity and greater precision in our lexicon. Our field of brand communications is exploding in a revolutionary era, with new knowledge, insights, and just things which need clear labels and cataloguing.

The issue came up in a recent dialogue with a new friend made during a webinar.

Both Sam Ford from Kentucky and I were taking part in a ‘Bulldog Reporter’ on Creativity to practitioners across the United States.

During my contribution I made repeated reference to the word ‘stickiness’. I use it to imply a contemporary reference to any content’s memorability and replicability.

Sam said he challenges my use of ‘stickiness’ and kindly provided me a link to his news book he co-authored with Joshua Green and Henry Jenkins.

Sure enough, I came across other modern meanings and applications of the word ‘stickiness’ with a particular emphasis on the word meaning an on-line space’s capability to hold a visitor’s attention.

Here, I think there is a need to distinguish between ‘stickability’ and ‘stickiness’. Maybe, we could do with a new, different word, like ‘Velcroness’, alluding to one fixed element’s ability to get something else stuck to it.

Going forward, the discussion made me realise how we do need to distinguish between the mechanical catch-and-hold ability of content, in contrast to my emphasis on content’s emotional connectivity which facilitates and promotes replication.

Their book quotes Malcolm Gladwell (2000, p132) who describes ‘stickiness’ as to ‘describe the aspects of media texts which engender deep audience engagement and might motivate them to share what learned with others’, i.e. sticky content is content people want to spread.

I would emphasis however, your content is optimised for spreadability if it has an emotional value.

The authors propose a term of ‘spreadable media’ to overcome what it perceives as an over-estimation of the power of media producers and underestimating the power of agency, rather than ‘passive carriers of viral media’.

Their debate on ‘can you create a viral video’ highlights the disconnect when: ‘prohibitionist corporate attitudes have collided with the collaborative nature of online social networks.’

The ‘viral video’ debate in my view exposes the gap between knowledge/knowing how something works, and actuality; can you really make it happen?

It’s rather like the joke about the management consultant who knows 150 different sexual positions but doesn’t know any partners!

In communications we have the reality that you can manage your creative outputs, influence your outcomes, but only hope that the integrity of your content will achieve outgrowths.

In reviewing their work I now conclude that we don’t just need new words, or better, more precisely-defined-and-agreed words. Rather, we actually need new bigger box concepts and categories to frame a more robust lexicography.

In my book ‘Effective Personal Communications in Public Relations’ I posited the concept of a ‘parameme’ – what I suggested is a three dimensional meme, a tool that can help understand a communication by how its defined by its present, past and future.

I feel using the concept of parameme, as a vehicle for how content is both defined by its existing context along with its potential to be replicated for outgrowth into new contexts has great potential.

We all also need to assert more the concept of the ‘Infosphere’ within which communications. Sam’s work quotes Rushkoff who “describes the culture through which modern U.S residents navigate as a ‘datasphere’ or ‘mediasphere’ – a new territory for human interaction, economic expansion and especially social and political machination.”

I am convinced future generations will look back on our era and establish an intellectual gap, a cultural disconnect between them and us. They will, I am sure, look back with a wry amusement how we in the early 21st century’s failed to fully embrace the concept of ‘Infosphere’ – in much the same way as we may feel incredulous on how Roman mathematicians failed to establish the concept of ‘0’.

Going forward, I hope Sam and I will be able to demonstrate it’s still possible to disagree, or have points of difference in our worldviews, but still be friends – because that in itself is a strong, powerful emotional connector that drives us forward as social animals.

I can imagine Edmund Black Adder creating a word for Dr. Johnson of ‘friendstickiness’ , a term to describe this very quality of relationships overcoming different points of view and moving onto new contexts.

I wonder if it will stick?

One thought on “When is ‘sticky’ sticky – memes, viral & words of mouth”