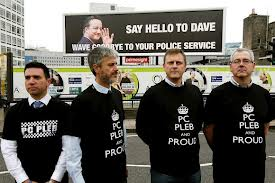 As the ‘plebgate’ row continues to make the headlines in UK news headlines is this yet another example of ‘truthiness’ and what fuels memes are not facts but rather what we want to believe?

The story unfolds of how Andrew Mitchell, a Government Minister, was originally accused of calling a police officer a ‘pleb’ after refusing to let him ride his bicycle through the Downing Street’s main gates. Now it emerges that he may not after all have actually used the word, along with its connotations, and the three officers involved in the incident, as well as their Police Federation, may be culpable of not telling the truth.

Regardless of the verifiable facts of the situation or what was exactly said in the incident, it reveals a far greater truth: we believe the facts we want to believe.

If subsequent disclosures reveal that the Minister Andrew Mitchell never said ‘pleb’, or anything like it, the reality remains that there are many people who wished he had said it, wanted him to have said it, and still continue to have a reality in their heads that he did say it.

No amount of ‘facts’ are going to dislodge that perception. The perception is like a comfort blanket of the ‘world-as-they-would-like-it’.

Welcome to the world of ‘truthiness’.

A major philosophical concept, well at least a label, was not created by a philosopher – but by a comedian. During an episode of the political satire show ‘The Colbert Report’ comedian Stephen Colbert coined the word ‘truthiness’. It means in essence: ‘the quality of stating concepts one wishes or believes to be true, rather than the facts.’

Our reality is that we all see the world through ‘truthiness glasses’.

Perceptions are just as valid as facts in our mental landscapes, certainly, when it comes to triggering belief, behaviours and reactions to Tory Government Ministers, who you might not like, or tolerate, but retain the right to sneer at their apparent privileged non-pleb backgrounds.
Let us first examine a scientific definition of ‘Perception’: ‘Perception is the process by which organisms interpret and organize sensation to produce a meaningful experience of the world where sensory stimulation is translated into an organized mental experience.’ (Source: Peter Lindsay and Donals A Norman: ‘Human Information Processing: An introduction to psychology’)
You are the only one who can tap into your perceptions – and how do you know you are really perceiving what you are perceiving? A conundrumm mitigating against 100% external validation.

When you might receive contradictory information/facts you can refuse to belive the new statement. You erect a barrier in your mental landscape preventing recognition of ‘the truth’ of this new information.

You do not want the dissonance,  the anxiety to upset your existing world view, which acts as a magnet for any negative information and precludes contradictory data, otherwise your truthiness, your definition of truth, would need to be re-evaluated.

So, it does not matter if Andrew Mitchell said ‘pleb’ or not, in terms of being validated by data. You can have your own facts. We all cultivate positive illusions about ourselves to boost or protect our self esteem, make ourselves happier, and to cope with difficult challenges.

Our brain’s reticular activating system filters how we see the world, filtering incoming data according to what you want to see. We prime ourselves to notice certain things; implicitly we do not see other things.

On the one hand truthiness is what some people want to exist.

So, if you want the reality of ‘Andrew-Mitchell-saying-Plebgate’ to exist, perhaps to demonstrate how you may either not like Tory politicians or if did vote for them but don’t feel comfortably aligned with who they are, want to create a social distance with them.

On the other hand truthiness is what some people want to exist.

And that’s the truthiness of it.

What truth are you deciding upon?