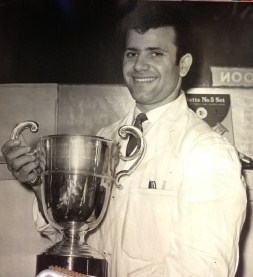 There are certain things I do in my life that I’m immensely proud of.

One such is arranging for a tribute to be made to John Asprou at the last Barry Kucha event organised in support of the BarryIdeasbank (the open source innovation and crowdsourcing project which I run that is Britain’s first and longest-running community ideas resource.)

John’s son Stas did a fantastic, moving, and humbling presentation celebrating the life of his father, which was one of seven different speaker presentations each illuminating an aspect of the vibrancy of Barry life.

From my viewpoint I wanted to highlight the remarkable story of a man who has created such a legacy for Barry, creating one of the town’s biggest hairdressing dynasties.

If you have your hair cut in Barry chances are that it will be one of John’s relatives clipping away with the scissors. We tried to calculate the number of heads that have been lovingly cared for and stopped counting after several hundred thousand.

Yet John arrived in Barry 50 years ago, you could say penniless – and scissor-less, from a remote village in Cyprus, via a journey across the Mediterranean Sea and courtesy of Italian and French railways.

He soon ended up in Cardiff before moving to Barry 50 years ago.

I wanted to highlight that within our society’s current debate about immigration – while there are genuine debates to be had on numbers and types of immigrant – many of these statistics will nonetheless, make a valuable and lasting contribution to British society. John’s story seemed to epitomise this.

Now, with three generations of self-employed small businesses providing a high quality service to the community, all of whom would do John proud.

Sadly, I only got to meet John twice. Once for a pre-briefing drink in Wetherspoons and then, on the night of the Barry Kucha event at the Barry Memorial Hall, along with, it seemed, half of his family present.

I remember him telling me about the first leg of his journey to Britain, a harrowing ferry trip across the Med, where a storm broke and John thought he was going to drown.

A prayer to a Saint seemed to have worked, and he has been well blessed since with a loving family that will be sadly missing their beloved father and grandfather.

So, John, you may not be in the Barry Hall of Fame of famous inventors, sports people, politicians, or artists. Yet you made just as valuable contribution to life in Barry.

As a result it made me change the format of one aspect of the Barry Ideasbank. Previously, our Ideasbank defined itself as ‘Celebrating Famous Barry people and its history’.

In an age of how my mate Paul Carroll would define as being one ‘that prized vapid ostentation and indulgence over spirituality’, where our media and culture is obsessed with nonebrities –  people only famous for being famous – maybe this effort on the Ideasbank of also celebrating non-celebrities, but genuinely good people, who make a useful contribution to our world, may provide a tiny counter-weight to a world of mediocrity.

John passed away last week and his funeral is today (Monday September 16) at the Greek Church Of St Nicholas, Cardiff, and my thoughts and no doubt, many others will be with his family.

John, I, along with the legions of people who knew you, are sad to lose a friend.

As they say in Cyprus, Sas chairetó, ‘I salute you’.̱

One thought on “John Asprou – we salute you”