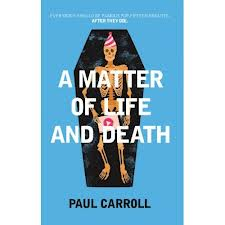 I’m fortunate in my life to have met and worked alongside so many talented people, many of whom write books.

On the one hand I always  say that if you want to keep a secret put it in a middle of a book. Apparently, according to American research only 42% will read a book after graduation.

On the other I venerate and adore books. So, if someone I know writes a book I feel I owe it to them to read it. (And also knowing first-hand the exceptional commitment and dedication required to produce the manuscript. When someone asks me ‘How do write a book, I say: “You don’t write a book, you give blood!”)

When it comes to reviewing the books on review sites like Amazon, I tend to usually profer a 4 star rating rather than a 5 star to avoid it looking like a contrivance of mates-of-the-author bigging-up and vacuously hyping the product.

However, I have no hesitation in bestowing a 5 star rating of an old mate’s first novel.

I first met Paul Carroll over 20 years ago at an industry awards do in Manchester where I think I’d been one of the judges. In those pre-Internet days we didn’t have the potential for connectivity and pseudo intimacy that exists now.

Paul I knew had a reputation as a leading light, a doyen of the burgeoning Manchester PR scene and I was plugging away on one side of the Pennines, trying to get a head of steam at the time behind the notion that ‘Leeds was about to usurp Manchester as the Northern Capital of PR.’

Paul is a consummate PR man (and I use that description as a compliment) and when introduced he said: “Andy Green, I’ve always wanted to meet you. You do some great work.” With the compliment lapped up and the conversation soon flowing on to football and how he was born in a pub in Leeds; Paul achieved lasting respect and affection.

So, here’s my review on Amazon and Waterstones and recommendation for your next holiday read.

“‘ Matter of Life and Death is a great must-read novel for anyone with the slightest connection in working in the world of ‘media’.

The book is like a multi-storey car park, in working on so many levels.

It’s a parody of our media-obsessed times and its celebration of nonebrity culture and to quote the book, ‘that prized vapid ostentation and indulgence over spirituality’.

On another level it’s a thriller with a can’t-put-down quality in its final third, as the devious twist of the main protatgonist’s conspiracy neatly entwines the destiny of all its characters.

And it’s also a spur for admiring media savviness in our 21st century world of Twitter, personal brand media strategies, and 24/7 news, displaying an astuteness and authority that was characteristic of the author in his earlier professional career.

Do buy the book for a great holiday read, or as an antidote to the welterweight of content of blogs and informmercials that consume the life of the typical modern-day media professional.

‘A Matter of Life and Death’ would also make a brilliant television series or film in the vein of classics like ‘A Very British Coup’.

I hope we see more from Mr. Carroll. The lad shows tremendous promise.”