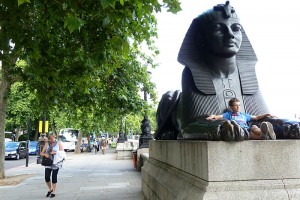 Plans in London to brand part of the city ‘North Bank’ are doomed by a failure in not understanding memes.

The latest attempt to use the power of branding for place marketing sees the area on the north bank of the Thames aims to emulate the success of the ‘South Bank’ area which has witnessed a remarkable regeneration and reinvigoration. (It is well worth a visit as a truly vibrant, cultural and social experience.)

So the obvious thing would seem to brand the opposite side of the river as ‘Northbank’.

I do like the response to the idea from comedian Barry Cryer who said: “As far as I’m concerned anything that contains the name ‘bank’ is totally unacceptable.”

Lobbying for the change are businesses aiming to create the Northbank Business Improvement District.

I fear they will succeed in creating a formal name but in terms of giving the world a potent meme – a name that will live on and  replicate of its own volition – and become widely known, I am not optimistic of its success.

The history of branding is littered with failed place names.

Remember ‘Salop’, which for a short while, from 1972-80 sought to replaced what was formerly, and is now known as ‘Shropshire’. (I never did hear a poem about a ‘Salop lad’!)

In terms of city area branding ‘Midtown’ is now an internationally generic category name for city areas that have a ‘just-close-to-the-main-centre-but-still-enough-to-entertain-you-and-be-of-interest’.

The ‘Midtown’ name serves a purpose. In a busy, confusing time, it gives you a handle. Hence, it seems to work reasonably well for the Holborn area of London.

What information value does ‘Northbank’ do – other than provide a geographical reference point?

‘South Bank’ already had an iconic touchstone at its heart – the South Bank Centre. It has a coherence for cultural activity combined with not being the West End and the prime cultural spot. It subsequently serves as a totem also for slightly alternative, a hint of subversive fringe-like activity. Crucially, people like it – therefore building favourability for any associated brand.

What is the cultural nucleus of ‘Northbank’?

It already has some sub-brands: ‘The Strand’, ‘Embankment’, ‘Trafalgar Square’ and to a lesser extent ‘Aldwych’.

London already has under-performing area brands. I’m always intrigued by the name ‘Fitzrovia’. It sounds like a quaint Eastern European state where I like to muse, there is a Crown Prince of Fitzrovia’!

Personally, the infosphere space which the proposed ‘Northbank’ area seeks to occupy in my mind already has a tenant: ‘North Bank’ belongs in my thinking – and to many others – is attached to the football terraces – particularly my beloved West Ham! (‘Tiptoe through the North Bank’ is a terrace son I remember from the ‘60’s.

These are what I call ‘Suffocater Memes’.

You could argue the same issue applies to South Bank’ but I believe the tangible and informationally vibrant South Bank Centre has been a powerful Booster Meme. It overcomes competing claims of other part of the football staium and subsequently owns the space in my infosphere.

The lesson for the ‘Northbank Business Improvement District’ is that your meme has to be:

Is there any hope then?

Northbank may be relieved by the meme cavalry of a Booster Meme in terms of a new iconic building called ‘Northbank’ or a television series ‘Northbankers’.

Alternative strategies might be to build from an existing sub meme.

‘The Strand’ is a London area meme with capacity, in my view, to work harder. (Roxy Music even did a song ‘Do the Strand’).

Maybe you could extend the ‘Strand’ meme into ‘Strandbank’, ‘Strandside’ may have potential.

The usual reaction to these types of suggestions is to say ‘the Northbank is a more logical name’.

And it is this which is the biggest mistake people make in seeking to cook or cultivate memes: it is not the logical that determines the success and impact of a brand name it is meme-friendliness determined by its emotional connectivity, memorability, affection, and lack of rival suffocater memes.

My challenge to the Northbank Business Improvement District is, will anyone be using your name of their own volition in five years time?

Meanwhile, I’ll tiptoe though the Northbank and associate the term by its prevailing meme.