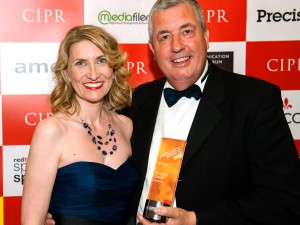 Can I use this blog to say a massive big ‘thank you’ to all the people who voted for me to win  the ‘Outstanding Public Relations Professional’ award in the Chartered Institute of Public Relations'(CIPR) annual awards this week.

There should have actually been three awards for the all the short-listed candidates – Lis Lewis-Jones and Rachel Miller – who have been shining examples of talented busy professionals yet crucially putting something back into the profession.

I think the award sends a great signal that if you are of a certain age – where you share the same hair colourist as George Clooney – you are not finished, nor over the hill.

Hopefully, my example of now pursuing a portfolio career spanning public relations, brand story telling, university lecturing, and creativity and innovation consultancy serves as a positive role model for anyone 45 plus.

The award is also salutary for recognising another key aspect of my work and the power of public relations: to give a voice and muscle to the weak, exploited or vulnerable in society.

I’m particularly proud of my work for the Bully-Banks campaign where small businesses across the UK come together to overcome being ignored, browbeaten and in numerous incidents being put out of business, through being mis-sold Interest Rate Swaps agreements, to secure justice and better the mighty banks.

The Bullly-Banks campaign was short-listed in the awards. Frustratingly, it did not pick up the top award on the evening – in my view had they offered a Grand Prix prize it should have won that – and I’m not being flippant. (Award judges – I   really would challenge you – hang your head in shame!)

The significance of the Bully-Banks campaign was that for an industry accused of being manipulative, exploitative and basically alluded to as being on the dark side, here was a campaign that showed the full potential of PR as a tool for good.

The award recognised my achievements during the year including:

• as PR Director of pressure group Bully-Banks successfully campaigning against bank mis-selling to small business
• producing under my own initiative an ‘Innovation & Creativity Toolkit‘ for the Institute – now being made available to professional bodies worldwide
• publishing my latest book ‘Tubespiration! – how to get your next brilliant idea by using the London Underground as a creativity tool.’
• creating of the UK’s first community IdeasBank for his hometown of Barry
• being an Associate Director with Cardiff-based Working Word Communications, a partner with GREEN Communications in Wakefield and a visiting lecturer at Cardiff University on its Global Communications masters degree course.

I am also a Fellow of the Institute and also of the Royal Society for Arts, Manufactures and Commerce.

It was a great win and a great honour – being chosen by votes from fellow PR practitioners across the UK – so again, a massive big ‘Thank You’.