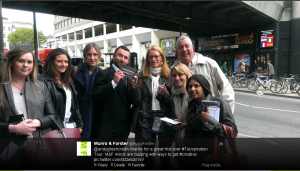 It was a day of unexpected twists and turns – starting off with slipping over on the grass bank down to the coast path from my home on beautiful Barry Island, and staring at the early morning sky at 5.30am.

The day’s surreal quality extended to meeting an inspirational figure in the men’s toilets at Victoria Coach Station – the young toilet attendant was so cheerful, positive and upbeat in what many others would regard as a fairly depressing work environment. His enthusiasm and joie de vivre was contagious.

The crowning surreal moment was waiting to meet up with the first Thinking Thursdays Tubespiration Tour group outside London Bridge station. The rendezvous point also happened to be the gathering area for vampires, ghouls and monsters aka the promotional staff for the nearby London Dungeon and Tomb visitor attractions.

No, I wasn’t mistaken for one of their staff!

It was also great to meet up with old friend Maria Gandara from the charity ReThink Mental Illness – which is receiving all profits from the Tubespiration Tours. I first met Maria as a delegate on my Creative Writing class for the CIPR.

The first tour was booked by a team from public relations agency Munro and Forster. The vampire guy in the photo,with blood streaming from his face is not a member of their team, but rather a young Bulgarian lad promoting the nearby Tomb attraction.

They were a great group, who seemingly got a lot out of their 60 minute tour to Borough Station – which during World War II served as a shelter for up to 14,000 people. Did you also know that London Bridge station is the only Tube station with the name ‘London’ in it?

The second Tour from Old Street station provided the chance to encounter some ‘Cockney Creativity’ – featuring a comic twist on the station name to brand the station’s retailer of traditional confectionary ’Old Sweet Station’ (well, I do love a pun).

The creative expedition with a team from public relations agency Splendid Communications saw us visit Angel Station – home to the longest escalator on the Underground.

A surreal day was completed on my return to South Wales to see one of my favourite bands of my youth – The Specials play in a swimming baths in Newport. They certainly made a splash with strands of ‘Ghost Town’ providing a certain poignancy for Newport.

Thanks to all who took part – and also to Matt Cartmell at the Public Relations Consultants Association for getting behind the idea. Further details at www.tubespiration.com