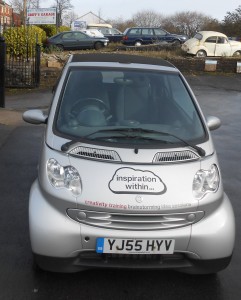 Congratulations to the World’s Smallest Conference Centre for passing its MOT.

The Centre, aka a two-seater Smart car, which has appeared at numerous conferences and events around the UK, as well as completing UK tours in 5 days, and a tour of Wales, has been visited by luminaries including Ed Balls MP, and architect Will Allsop.

Other claims to fame include Andy squeezing in with 4 Australian woman at an international creative industries conference, and one delegate at a conference in Belfast losing their umbrella in it.

Seriously, the idea is to offer an unusual, intimate, and flexible venue to engage with people on innovation, creativity or consultation, and to champion the cause of creativity.

If you want to use the World’s Smallest Conference Centre – for your conference, event, outreach work or community engagement work – do get in touch.

The World’s Smallest Conference Centre was launched at the London Design Festival in 2007.