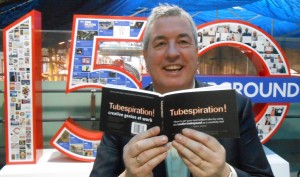 Commuters are being urged to switch off their mobile phones or stop playing computer games on your journey to work for just one day each week and join in with ‘Thinking Thursdays’ – to tackle hyper-attention where people spend less time thinking.

To help commuters spot the ideas and opportunities around them better, Thinking Thursdays will feature special ‘Tubespiration!’ creative thinking training tours on the London Underground.

The ‘Tubespiration! tours are designed to enable people to take advantage of the down-time in their daily schedule, and preserve a precious opportunity for thinking – instead of being absorbed by computers or listening to headphones.

The ‘Tubespiration’ tours are being led by leading creative thinking expert Andy Green starting from outside Mornington Crescent station, London – regarded as the most creatively inspiring Tube station on the London Underground – at 12 noon and 2pm on Thursday April 18

Tubespiration! tours will also take place at the same times on Thursday on May 16th, 23rd, and 30th.

Top tips for Thinking Thursdays include:
• Switch off your headphones or computer games and set your mind free
• Don’t be afraid of being alone with your thoughts. Silence can be golden – start enjoying and savouring mental solitude.
• Think of your problem or challenge as a question. Explore using different words, ways of stating the question to help you look at things differently
• Use things around you to stimulate new thoughts or inspire you
• Remember to capture your thoughts and ideas

Tour guide and founder of the Flexible Thinking Forum Andy Green said: “Just one day a week using Tubespiration! to celebrate Thinking Thursdays could enrich your life and restore good thinking habits to help you see more opportunities around you. You can make your next trip to work an inspirational journey.”
ENDS
For further details please contact Andy Green of the Flexible Thinking Forum on 07815 884 525 or email andy@andygreencreativity.com

Mornington Crescent
The London Underground Northern Line station could be regarded as the most creatively inspiring station on the network.

Indie pop band penned a song ‘Mornington Crescent’ claiming they had fallen in love with the station.

Novelist Robert Rankin uses Mornington Crescent as the home of the Ministry of Serendipity, a fictional agency which aims to uphold the British Empire ruling the world by working with aliens. (He claimed this explained why the station was only open on weekdays and closed for ‘repairs’ for much of the 1990s because of the top secret work being done there!)

Mornington Crescent’ inspired an eponymous BBC Radio 4 panel game featured in the comedy radio show ‘I’m sorry I haven’t a clue’. A fitting tribute to the programme came when Mornington Crescent station reopened in 1998 after six years of closure for lift repairs. The show’s team performed an opening ceremony. There is also a memorial plaque at the station to the late satirist Willie Rushton, one of the show’s longest-serving panelists.
The panel game consisted of each team member announcing in turn a landmark or street, most often a Tube station.  The evident aim was to be the first to pronounce ‘Mornington Crescent’, amidst previous humorous banter and discussion about the rules or legality of each move, or the strategy being adopted. The truth however, is that there are no rules to the game; the station naming and intense debate about the rules were actually fabrication; it gave the impression of a game of skill and strategy, with long-winded, complex rules and strategies, but was in reality, a parody. So, in the game ‘Mornington Crescent’ there are no rules – yet people act as if there are – a fitting starting point venue for Tubespiration! tours.