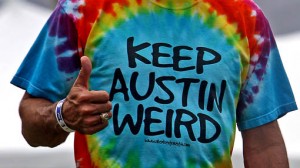 Does your Town or Brand need to become more ‘weird’? Is it already weird?

That’s the question I’m addressing by setting off  this week (March 8-17th 2013) on a study visit to the SxSW Festival in Austin, Texas, home of the ‘Keep Austin Weird’ campaign.

I will be examining how locations and brands could learn from the Texas town by exploiting their unusual assets, character or claims to fame.

I will investigate how creative branding and marketing can generate new jobs and boost the economy.

The campaign’s popularity has inspired numerous other imitators as well as being a key strand in enabling Austin to be rated as one of the United States most creative cities.

To assist with my research I will be meeting up with Red Wassenich, the creator of the ‘Keep Austin Weird’, Joshua Long, the author of ‘Weird City’ along with representatives from the Austin Independent Business Alliance.

Looking ahead to his bizarre branding investigation places like my home town f Barry Island, face tough competition to create jobs, attract visitors, and create an enterprising culture. Austin has become internationally-famous for celebrating its ‘weirdness’. We need to learn what lessons it can offer for towns, tourist locations and brands.

Although the subject might appear flippant we live in an age when variance is seen as a bad thing. We are developing aversions to unplanned variability. This can be  metamorphized into antipathy to nonconforming and deviant. Infatuation with conformance severely hinders the quest for greater resilience and innovation in society.

Interestingly, in just a few UK case studies I have discovered a high latent potential for weirdness.

Wales
1. An Englishman has the right, granted a 1,000 years ago, to shoot a Welshman from a distance of 12 yards using a longbow in the grounds of Hereford Cathedral on a Sunday’
2. There are four times as many sheep as people in Wales and has 15 per cent of the sheep in the European Union
3. In the 19th century nearly 14 per cent of the Welsh population had the surname ‘Jones’ and more than half the population were covered by only 10 surnames.
4. It has the longest train station name in the world
5. Sea weed – lava bread – is a local delicacy
Barry Island
1. It is not an island
2. It is home to the TV series ‘Being Human’ about a vampire, werewolf and ghost that share a house.
3. It is the birthplace of the Australian prime minister
4. The resort is also home to ‘Nessa’s Slots’ of award-winning TV comedy ‘Gavin & Stacey’
5. The place boasts its own vernacular including the popular catchphrase ‘What’s Occurrin’ meaning ‘What is happening?’

Yorkshire
1. Everything in Yorkshire is ‘best int’world’
2. Yorkshire Pudding can be eaten as a starter, main course or as a dessert.
3. The last place in England to burn a witch – Old Wife Green was burnt in Pocklington in 1630.
4. It has a brass band called the Black Dyke band.
5. The local version of chips is fried in beef dripping.

Wakefield
1. It is home to the ‘Mulberry Bush’ of the children’s nursery rhyme fame – which still exists, within the walls of Wakefield Prison.
2. It is the venue for the World Coal Carrying Championships.
3. It hosts an annual Rhubarb Festival
4. Was where the Pretenders’s classic song ‘Brass in Pocket’ was inspired, when Chrissie Hynde first overhead the phrase ‘any brass in pocket is mine’
5. The Wakefield Media Centre was Britain’s only moo-ing building