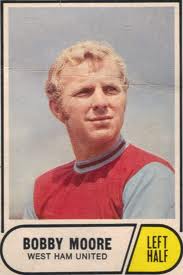 Despite dying 20 years ago and having stopped playing football nearly 35 years ago the legend of my boyhood hero, former West Ham United and England captain Bobby Moore grows.

Rather like interest will grow next year for the centenary of World War I, in spite of an ever-growing time gap, the appetite for commemoration grows.

The answer is that are examples of memes – self-replicating bodies of information that keep a legend alive.

Yes, there are prompts to promote the legend: West Ham United, Moore’s old club, is staging a special celebration at Monday night’s game against Tottenham.

And virtually every history museum and their cousin will be promoting the 100th anniversary next year of the start of World War I.

But in both cases the core message grows and grows by itself.

The irony for Moore was after an illustrious football career his latter years were marked as a forgotten man of football.

But his death creates scarcity – he is no longer around – and provides a clear way for everyone to create the Bobby Moore they want – the legend.

And Bobby’s legend thrives, because there is sufficient number of people who want it to be. ‘Bobby Moore footballer’ is now ‘Bobby Moore meme’.

For West Ham fans like me he represents the icon of playing ‘the West Ham way’ and was captain in charge during the Club’s greatest successes.

For the wider football family he was captain of England, the only Englishman to hold the World Cup trophy aloft as winners.

For the British sporting brand he is present in the all-time pantheon of the country’s greatest sportsmen.

And for the wider British brand he represents an icon of a Britain in the swinging sixties and seventies, a golden boy of a golden era.

By treasuring the Bobby Moore meme it provides a feelgood-factor that makes us enjoy a more positive view about who we are, what we represent and where we stand in the world. The Bobby Moore meme reduces dissonance, allays any anxieties about our realities of our present-day world.

Sure there are some inconvenient truths for our meme; West Ham fans overlook the fact that at the height of his career he nearly joined arch rivals Sp*rs. I’m sure he was innocent over the incident with the stolen bracelet in Bogota just before the 1970 World Cup – but then I’m biased

I will be sad today, reflecting that Bobby is no longer with us. I will mark the occasion with a blast of my favourite tribute song to the man ‘Viva Bobby Moore after six minutes into the Tottenham game. http://www.youtube.com/watch?v=QR557as4JF8

But I’m also glad that my boyhood hero and lifelong role model has become a potent  meme for West Ham fans, football fans, sports fans and anyone buying into the British brand – and long may it grow. Pass it on.
In 1993 Bobby’s wife Stephanie established the Bobby Moore Fund in partnership with Cancer Research UK to help raise money for research into bowel cancer and for public awareness of the disease. If you’d like to make a contribution to the fund, you may do so by visiting their website at www.cancerresearchuk.org/bobbymoorefund.