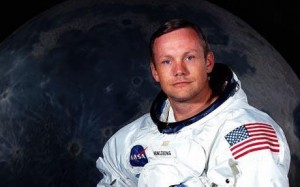 I once met Neil Armstrong, the first man to walk on the Moon.
And he was I felt – wrongly at the time – a strange man.

Now, I can recognise he was a victim of the ‘celebrity paradox’.

I was reminded of the encounter with news of his death last week. He was the top-line draw at the Yorkshire Business Convention in 1999.

Luckily for me a good mate was head of comms at the event sponsor and fortuitously got an invite into the VIP area, where we had the chance to meet him one-to-one.

Here we were with not just the most famous man of our generation, but maybe of our epoch: here was the first human being to literally step onto another world.

It quickly became apparent that this was no regular celebrity encounter. We witnessed repeated rebuttals for his photo to be taken and for giving autographs or signed photos to even the worthiest of causes.

It seemed he was the most famous person of our era and he was refusing to play ball with the attendant fame game that went with it.

My friend and I succeeded in slightly circumventing the ‘no-photo-with Neil’ rule. We had our picture taken two yards seemingly innocuously in front of the oblivious Neil, with the photographer making sure he got Mr.Armstrong alongside us, albeit slightly in the background!

At the time I came away feeling slightly let down. Here I was in the presence of a genuine super hero and he failed to register either as any of the regular celebrity memes:

a) a nice guy in spite of being famous
b) interesting person with insightful, inspiring observations
c) big headed egotistical bastard

Instead, we had this person clearly in immense discomfort in his new spacesuit of celebrity that he now had to permanently wear.

Years later, witnessing the growth of what I labelled ‘nonebrity culture’ – a culture of people obsessed with  being famous for no particular reason, I now have a better understanding of Neil Armstrong’s post lunar angst.

In an age of decreasing recognition and deference to formal religion, we need heroes on our horizons to give sense and shape to our living as social animals in our group.

As noted in Orwell’s ‘Animal Farm’, ‘all animals are equal, but some animals are more equal than others’.

In our modern information age world, yes we all have one vote in democratic societies, but we need iconic individuals to seemingly hold as important. These are our new deferential points.

The word ‘celebrity’ originally meant as the fame attendant upon someone of note or who has achieved something. Now, in our nonebrity culture, the fame thing has become an end itself, divorced from a genuine accomplishment being a prerequisite.

Yet hero worship comes with a cost for the hero: are famous people entitled to a private life, a life of genuine sincerity or meaning? Or should the loss of privacy be the price to pay for being famous – and hence being a ‘celebrity’?

There is one theory that Neil Armstrong was influenced by his aviation hero, Charles Lindbergh who lived a reclusive life to shy away from fame, only to have his child kidnapped and murdered as a consequence of his celebrity. Lindbergh advised Armstrong of a ‘no autographs’ rule.

Returning from his mission Armstrong became deprived of ‘normal’ relationships, with celebrity groupies faking friendship and sincerity – the celebrity paradox

One way of coping with this was to only accept things on your terms, a personal brand where you play by your rules.

So maybe now, years later, I reflect; it wasn’t Armstrong that was strange, perhaps it was the world he came back to is strange.