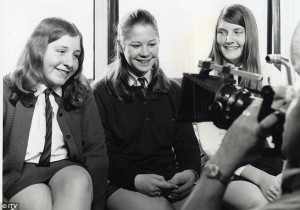 I have a particular interest in the documentary TV series ‘56Up’; three of the girls featured in the ‘experiment’ were at the same school, as me in the East End of London.

The series is not only of personal interest but offers lessons for brand communications and for managing innovation and creativity.

It provides a series of snapshots , albeit a media-contrived one, of our society, how it is changed over the last half century, and tellingly, if there is any social mobility.

If only the programme makers had just started their project two years later they might instead have included a young boy from London’s East End in their survey.

Visiting this lad every seven years would show how the young man eventually went to university, secured a middle class career, in turn raising his own, now middle class family.

Crucially, the young lad, like Lynn, one of the girls filmed in 56Up, went to a grammar school.

Had he not gone to the grammar school it may have been unlikely he would have received the educational nudge to break him out of any socio-economic determinism.

Please, this is not a ‘Daily Mail’ rant about bringing back the grammar school.

Rather, it is to highlight how in any communications change or innovations programme, what is needed are:

1. You need to use a flexible range of responses; it is not one size fits all. Universal solutions universally don’t succeed.

I am not advocating a return to the grammar school system as an answer to Britain’s evidently growing lack of social mobility. Yet, rather than throw the baby out with the bathwater, some aspect of its solution, such as offering an elevator of mobility through special outreach programmes, could be considered.

Amidst the complexity you need to choose the best tool for steering change. The best social indicator – if we want a more just and fair society – is not necessarily the absolute or relative measures of poverty.

I was fortunate to visit a fascinating exhibition about the LA Riots in Los Angeles’ Museum of Tolerance, comparing two sets of riots in the city separated by a generation.

The riot-stricken inner city area had the same records of absolute and relative poverty.

The crucial, telling difference however is that it is not the same individuals or their families making up these groups; those who made up the poor cohort of 25 years ago had moved on and up in the social hierarchy, to be replaced by new groups of migrants entering their new society at the basement level.

Sure, LA had its riots. But it was not the same cohort doing the rioting.

What is evidently concerning about Britain is how much of its problems arise from compound inter-generational poverty. Or in the words of Rab C. Nesbitt: “I’m scum, and my father before me was scum, and his father before him were scum.”

By using a rule of thumb of ‘churn rate’ this would, I believe pose a far more effective tool for those passionate about working towards creating greater social justice in our society.

3. Some of your tools could actually get you addicted to your problem

The dominance of using relative, rather than absolute poverty as a measure for social well-being means that by using relative measures means we will always have ‘poor people’; there will always be segments of any group who are relatively worse off than others.

I suspect by using relative measures is a way to keep the ‘corduroy professionals’ in a living, with a steady flow of victims living with learned self helplessness in need of professional help, and maintain an attendant bureaucracy to service this need.

So, when it comes to your next innovation, creativity or brand communications challenge are you are you looking at the right thing – or indeed, the wrong thing, and maybe sometimes the counter intuitive answer, might offer some resolution, or partial answer, to your challenge.

Now, I wonder whatever happened to that young lad in the East End of London; he must be about 53 years old now…