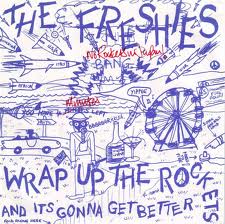 Heard disturbing news on how amateur scientists can now cook up their own DNA. I instantly concluded this means the end of the world: the Frankenstein vision of an uncontrollable DNA strain/virus sprang to mind.

I also took reassurance from one of my favourite punk songs,‘Wrap up the Rockets’ by the Freshies (featuring the late, great Frank Sidebottom)

In my innovation and creativity training I share how any problem can be one of three types:

Wicked – systemic problems, where at best you may only get a partial solution.

Cooking up new DNA is not like a new recipe from Delia.

It creates new unspecified, undetermined, redefined biology into our universe. The root caused of a future systemic problem which we probably won’t have a partial solution for it, if harmful to humans.

Just as alarmist thoughts spread through my brain, a song came to mind: ‘Wrap up the Rockets’ by the Freshies  – a song depicting one young lad’s response
to an imminent nuclear attack. (It was penned at the height of the Cold War,
when me, and many others, were going on anti Cruise Missiles demos.)

Before you get too depressed, find the song on YouTube and singalong.

The response of sitting on the big wheel in Rhyl with your girlfriend and singing: “There’s no way out, so we might as well have a good time” at least cheers you up, and maybe redefines your response to this and other issues.

In critical thinking terms it helps you reframe a Wicked, systemic problem (the world coming to an end either through nuclear war or DNA gone crazy) into a Critical, solvable one (what’s the best way of having a good time today.)

Funnily enough, I was feeling a bit down this week with one or two steps backs on various projects. Yet, thinking about the world coming to an end has at least cheered me up for today.

What are the other challenges you face – and what ways can they be reduced down from Wicked to Critical problems?

Now, what’s the equivalent of the big wheel in Rhyl where can I take my lovely wife….