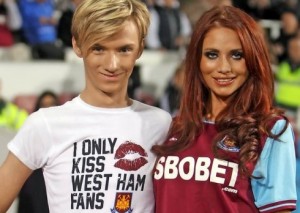 If you support a football team is this a key part of your identity and brand story?

The atmosphere at the game was magnificent, with both sets of fans playing their part in creating a rousing atmosphere, reminiscent of football games past.

Leeds scored first, but then West Ham equalised and the fans created a cacophony of passion-fuelled noise.

Actually, the game itself was pretty poor. Indeed, the best part of the day I found was the
30 minutes after the match when the 5,000 travelling supporters were held behind.

Because the 30 minutes were filled with a great sense of belonging to a wider collective,
asserting your world view (well some parts of it) and as a result, feeling better about yourself, who you are, and what you stand for.

Much to the West Ham faithful’s initial astonishment, the Leeds manager, Neil Warnock (whose name is an anagram of someone called ‘Colin W…’) brought his team back out for
some additional post-match training, on the pitch in an empty stadium, bar the
5,000 West Ham fans.

The fans in claret and blue (the West Ham colours) gave full pelt to this opportunity.

Chants of ‘1-0 and you mucked it up’ (I think you can replace the ‘m’ in that last phrase) and my favourite in a near-deserted ground, ‘Excretia team, No fans’
(again substitute one word in that phrase) rained down on the bemused Leeds players.

Perhaps chants of ‘Neil Warnock is a paedophile’ were rather extreme (although some might say unkind to paedophiles.)

When the Leeds players eventually left the field after their epilogue performance, the West Ham crowd then focussed their attention on the man in the suit on the perimeter
fencing, who evidently from his dress, was someone in charge.

I wonder what the effect is on your self-esteem of having 5,000 people chant at you ‘Your suit’s from Matalan’ to the tune of ‘La donna è mobile’ from Verdi’s Rigoletto?

So, it was as much fun being a part of a crowd where there was not any football match going on.

The lessons I would draw from this experience are:

In his excellent must-read football book, ‘A season with Verona’ Anglo-Italian
writer Tim Parks follows the downs and downs of his newly-adopted Italian Hellas Verona, he describes how an intellectual can enjoy football for non-intellectual reasons: his conclusion it seems is that we all have to be part of a group, why shouldn’t it be a football team?

I know what he means; there are some very nice and good individuals I know who support Chelsea and I will forgive them – and I suspect, they are living proof of exceptions to any rule. Yet, by and large, if alerted to any allegiance to the Stamford Bridge outfit, the other person has to work harder to gain my respect, and that’s me being generous.

Having a ‘West Ham Brand Story’ has provided me with a resolve to face adversity. (There is good reason why the club’s anthem ‘I’m forever blowing bubbles’ features
the line ‘..and like my dreams, they fade and die’.

It has also given me a rock of arrogance; whatever other teams achieve they can still never be better than my West Ham; we won the World Cup in 1966, we play to traditions of attractive football over winning at all costs, Bobby Moore, Geoff Hurst, Trevor Brooking, Billy Bonds, Paolo di Canio, and Harry Redknapp (in his playing days) are, in my eyes, an unrivalled players’ hall of fame, along with enjoying a traditional East End dish of pie mash before the game, and with the best football anthem ever with ‘I’m forever blowing bubbles’…..

Some may question the factual accuracy of my claims about West Ham. But the truth is they are my myths, and unlike Winston Smith in Orwell’s ‘1984’, no one can take them away from me.

They are part of me, my brand story.

They help me define how I see the world, and how the world sees
me.

You may not be a football fan. Yet, what allegiances do you have –
and how do they define your Brand Story?

Now, what can I say about Neil Warnock…