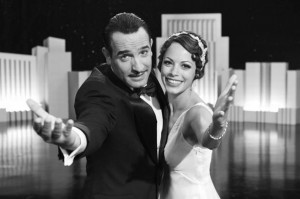 The triumph of The Artist at the Oscars has profound lessons for innovation, creativity and strategic management.

The film scooped five awards including best picture, best director and best actor yet was a silent movie: fundamentally using a technology and formula for telling its story from an era of your grandparents or great-grandparents.

The cue is not for everyone to raid the culture and technology of the 1920’s – although there will inevitably be a halo and a meme surrounding The Artist. (Besides, nostalgia ain’t what it was!)

Rather, its unlikely success highlights a key paradox facing creatives and strategic managers: we are operating in an era of more  ‘painting-by-numbers’ ways of managing and responding yet, even greater opportunities for what  I call ‘transcendental’ breakthroughs.

The Artist success also highlights the power of context: I suspect it would not have achieved so much impact had it been done 10-20 years ago (a time still significantly removed from the pre-Talkies era.)

Now is evidently the right time for a film using the medium and stylization of a silent movie. Perhaps it is a reaction to 3D/super-digitalization blockbusters, in an age where people are longing for a sense of certainty, uncomfortable with the profound changes they are currently witnessing.

In our age, a film in black-and-white, with largely a silent sound medium, and a style of exaggerated poses acting is now novel: no one else is doing it.

For innovators, creatives and strategic managers 5 key lessons from ‘The Artist’ are:

1. Harness the 80:20 rule where you need to do 80% of your things fastercheaperbetter. This is where you engage ‘painting-by-numbers’ thinking and doing to the nth degree; what ways can you systemize, optimize whatever you do, using unambiguous processes and goals – what I call ‘uncreativity’.

I do predict greater future use of systematic creativity tools to generate a stock of instant ideas and solutions.

2. Break your boundaries. By following the herd of sheep, being totally subservient to ‘orders from above’, will limit your potential. Indeed, you will be left behind. In contrast you need to use 20% of your resource to explore, pay with and develop the new: the equivalent of doing a silent film now in a non-silent age.

3. Respect the past and periodically review what has gone before. If there is some added value to be achieved, use it. Just because it is old or used before, you are now living in a new context. As Michel Hazanavicius, the director of The Artist will testify, to the success of this strategy.

4. Identify the now. Can you use some aspect of the current popularity of The Artist meme in your work?

5. Learn to be uncomfortable with being uncomfortable. Even The Artist, harping back to a former era, demonstrates there is no safe place, where you can resist change and all will be well. (I remember the episode of BBC TV’s family tree show ‘Who Do You Think You Are?’ where opera singer Lesley Garret discovered her grandfather was made redundant by the advent of talkie movies; he used to play the piano accompaniment at the cinema – the equivalent of the soundtrack.)

Strategically, there is no comfortable place. Get used to it.

So, do celebrate The Artist success. Go an see it if you haven’t already (although I think it’s a slightly over-rated film). And take on board these key lessons for your strategic management, innovation and creativity.

These issues are being explored in the ‘Creativity Paradox’, the latest in the Strategic Management Series organised by the Chartered Institute of Public Relations taking place at 5pmon Tuesday February 28th.

Further details and tickets at http://www.cipr.co.uk/courses/strategic-management-series-2012-creativity-paradox