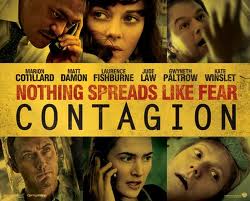 Just seen the new blockbuster ‘Contagion . It depicts a world facing the much anticipated killer virus which raised two thoughts.

Firstly, it resurrected the idea I had a for a major national celebration, or thanksgiving, that the recent reality of the swine flu epidemic was nowhere near as deadly as first feared – with a predicted 60,000 casualties – possibly including you or me – who are thankfully still alive.

At the height of the recession and downturn I highlighted that while the economy may be bad – the woes are still slighter compared to the ravages of a deadly virus – and a good excuse for a party of some sort.

Secondly, the film prompted me to think of what new memes will we be witnessing in a world increasingly ‘contagion’ conscious: a future more paranoid about catching germs.

Ideas are like viruses; which new ones will be created and spread?

1. First meme to go may be the old-fashioned hand shake. Believed to have originated as a symbolic gesture to denote you were not carrying a weapon, the open palm could one day be a deadly weapon for passing on viruses.

2. Could we witness the emergence of an alternative gesture? Something like the forearm squeeze: you want to greet someone you reach to a midpoint of the forearm and affectionately squeeze: creating connection, touch, and empathy – along with being germ free.

3. Will the sight of people with a cold wearing surgical masks be a common scene here – rather like is more common practice inJapan. (The science fiction writer William Gibson wrote that ‘the future is already here, it’s just unevenly distributed’- so one way of spotting future trends is to identify different practise in other parts of the world.)

4. Will we see the demise of the door handle – replaced by the ‘footle’,‘elbowle’or ‘kneele – new mechanisms to open and close doors using the foot, elbow, or knee – any respectable part of the body, instead of the hand?

5. Will we also wave farewell to the High 5’ to be replaced by other gestures? For some reason the goal celebration of West Ham captain Kevin Nolan – a ‘funky chicken’ dance comes to mind.

6. I’m scratching my head – I think that may still be socially acceptable – but I cannot think of a word in the English language which describes ‘a man who does not wash his hands after using the toilet’. (And ladies, from my informal survey of men’s rooms I reckon only one in three men do wash their hands. Yes, one in three! Myself, obviously being one of the ones.)

Many adjectives may come to mind but at present it seems our language has a vacancy to do a job of describing such an inadequacy – a misdemeanour of social etiquette likely to grow in significance in the ‘Contagion’ world of the future.

A possible label such as ‘smeghands’ comes to mind, (don’t ask me why…) but I am sure a new meme will stridently castigate those two out of three males.

If you are interested in finding out more about memes – and how ideas spread – help is at hand.

Memes, viral and word of mouth are just a few of the 101 different tips an ideas being offered to public relations and marketing professionals in the first ‘Word of Mouth and Viral Marketing course being run by the Chartered Institute of Public Relations.

The half day training course takes place in Londonon the afternoon of Friday November 11th. Places are limited, to book your place visit www.cipr.co.uk or ring 0207 631 6900.

The course has been devised and will be delivered by Andy GreenFCIPR. His book ‘Effective Personal Communication Sills for PR’, part of the Institute’s PR in Practice series, was one of the first PR texts to cover word of mouth and memes.

Sharing examples from the work of Edward Bernays to the latest cutting edge campaigns, you will go away telling your friends how you can manage your word-of-mouth, how to create positive messages about you, what you do and what you stand for.