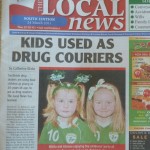 I am a great fan of ‘Wimbournes’ – where in the hurry to design a newspaper page there is either an unfortunate juxtaposition of two stories or words in headlines.

Any other examples welcome.

The name originally came from the old journalists magazine ‘UK Press Gazette’ in the mid 1980′s which coined the term and ran a regular feature on the latest sub-editing cock-ups.

In my creativity talks on ‘You’re never more than 12 foot from an opportunity’ I use a Wimbourne featuring a news story about me in the Leeds’ Yorkshire Evening Post . It featured a story about my PR firm in Wakefield hiring an open-top double decker bus to celebrate its winning of the city’s Business of the Year’ award featured alongside a lead story with the headline: ‘THUGS AMBUSH BUS’

It was a genuine Wimbourne – I have close friends on the paper and they did not realise their error until I pointed it out.

Interestingly, doing a Google search on ‘Wimbournes’ found nothing.

I wonder why the term has, other than my using it, seemingly died a death?

With the prospect of more newspapers dispensing with their sub editors and getting journalists to enter and design their copy, it opens up the doors to more libel suits and for those who prefer a bit more fun in their lives, hopefully more Wimbournes.

Anyone have any other examples of Wimbournes?