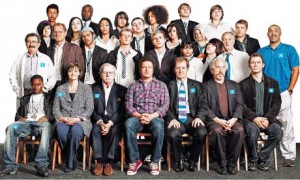 There was a fascinating clash of cultures highlighted in the new Jamie Oliver reality TV show ‘Dream School’ when historian David Starkey sought to teach a group of ‘difficult’16 year-olds.

We witnessed a war of wills between a classically educated master and the young people; the master, upholding an Oxbridge regime of deference, respect and reverence for the cause of learning, acquiring knowledge for its own inherent value, while his pupils, who regard themselves as equals, possessed a low boredom threshold, resilient to any new thing which is not immediately appealing.

What the episode highlighted was how ideas which survive are not necessarily the best in term of inherent quality.

Yet, what world are we creating? How well equipped will the next generation be which is unwilling to accommodate the non-easy?

Are we creating a generation conditioned to not digesting the difficult, education which might require some graft or discipline of coping with drudgery.

Perhaps there is a need for a new academic subject in the curriculum, something I would call ‘Tedia Studies’ – the concept that not everything comes convenient, and you have to endure the pain – the tedious parts of studying – in order to gain. Could this provide young people with a better preparation for the realities of modern life?

I could outline the schedule of study for a Tedia Studies course – but would you be bothered to read it?

One thought on “Dream School – do the kids need ‘Tedia Studies’?”